From the beginning of our life together we enjoyed travel, camping and adventure. Our Honeymoon was a trip to Yellowstone National Park in February to see the park by Snow Machine. Our first few years of marriage, we spent the summers living in a tent, while we worked in Jackson Hole, Wyoming.

After college the adventure continued as my career in the U.S. Army took us all over this great country and other parts of the world. Our camping accommodations evolved from a small dome tent to a fabulous creation, The Wildernest adventure camper.   Imagine a pickup truck camper shell/topper where the top of the shell is a lid that is hinged on the passenger side and flips open to a level position hanging off the side of the truck and a wall tent pops out of the top. The lid is supported by cables running over the poles of the tent and attached to the opposite side of the camper shell. The hori- 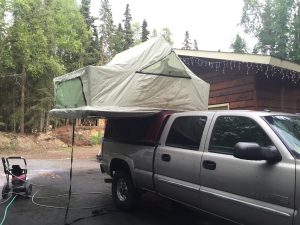 zontal lid is now a double bed. We also had a carpeted insert in the pickup with two bench seats that converted into another double size bed. We could camp anywhere we could park the truck and open it up in minutes. It was off the ground, and relatively dry. It had room for our growing family and provided many years of adventure from Texas to Alaska, all western states, and anywhere the Army sent us to include Germany and Austria. The Wildernest was our adventure camper 10+ years and still serves us today in a limited capacity, 28 years later.

While stationed in California in 2003 we upgraded from The Wildernest to a 26’ Aljo Travel Trailer with a Slide out.   We bought this trailer to keep in Alaska. On our first trip with this new to us, luxury rig, we discussed the possibility of living full time and traveling all over the country in an RV. The Aljo made it it to Alaska, and served as our Cabin, Hunting Camp, Fishing Base and Hotel when every we could get away to The Last Frontier. After 23 years in the Army, I retired. We packed up our household and moved back to Alaska. The only plan we had was to stay in the trailer while we found a house.   After 5 months with three teenagers and two dogs in a 23’ travel trailer, during the rainiest and coldest summer on record, we moved into our house. After that experience, our desire to one day travel full time in our RV was still alive.

Fast Forward eight years, we were looking at our impending empty nest, as our youngest was headed off to college. Our eldest daughter and her family were soon leaving Alaska, and they were taking our grandkids 4000 miles away from us. I work a great schedule of two weeks on (away from home) then I have two weeks at home. With these events we knew we needed to make a change in our life. We sold our home, ordered a 43’ Heartland Cyclone Toy Hauler, and committed to a Full Time RV life style. We would spend the summers in Alaska and the winter traveling the lower 48 states. I would leave the trailer and Gail near family when it was time for me to fly back to Alaska for work. We could then pick up our adventure where we left off. We had many great family adventures in the Aljo and it would make one more epic journey. In May of 2016, Gail, our daughter, her 4 kids and a dog packed into Suburban pulling the Aljo to head down the ALCAN on a 4000 mile journey, to their new home in Kansas.

The plan to get our new 5th wheel had me following them two weeks later with our truck. Then Gail and I would haul the Cyclone back to Alaska and live our dream. Not so fast. May turned into June, that was then July, and right past August to finally September, we got our Cyclone delivered to Kansas. It was too late in the year to haul it to Alaska, so we started our new life style living FullTime in our RV and we have been FreeBirds ever since.